The American crocodile is one of 13 different species of crocodiles in the world.

Endangered. Most of the world’s crocodilians — 17 species out of a total of 22 — are in danger of becoming extinct. All have suffered from collection by humans for their hides and the destruction of their habitat. 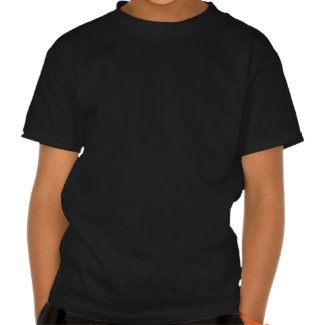 The American crocodile is one of 13 different species of crocodiles in the world. American crocodiles are well-armored with tough, scaley skin. They are gray-green or olive-green with long, slender snouts, which distinguish them from their cousin the alligator.

Unlike the alligator, the fourth tooth on the bottom jaw of the American crocodile is visible when its mouth is closed. Their teeth last two years and are all replaceable.

This species is characterized by the most reduced and irregular dorsal armour (osteoderms) of any crocodilian (Ross and Mayer 1983).

The tail is used like a paddle and is very powerful. A crocodile can swim as fast as 20 miles an hour.

The nostrils are located on the end of the snout. The eyes are on the top of the head and have a nictitating membrane (extra eyelid) which allow them to see underwater while protecting the eye. The area around the eyes of mature American crocodiles have a distinct swelling. The eardrums are located behind the eyes and are covered by a movable flap of skin.

The eyes, ears, and nostrils are all located on the same plane. The eye’s iris is silvery and the pupil is a vertical slit which allows good vision at night.

American crocodiles have conical, pointed teeth on the top jaw which interlock with those on the bottom jaw. These teeth are used primarily for grabbing and tearing, not chewing and cutting.

Crocodylus acutus is one of the largest crocodile species. The American Crocodile averages 12 ft (3.5 m) in length at maturity, with a maximum length of 23 ft (7 m) — (recorded in Australia. They don’t get that big in the US, where the record is 16 feet). The males are larger than females, and weigh an average of 500-1000 lbs (220-450 kg). Young crocodiles are 8 to 10 inches long when they hatch.

This species produces a commercially valuable hide and the principal reason for past declines in population size can be attributed to the extensive commercial overexploitation that occurred from the 1930s into the 1960s.

Crocodiles can reach 60 to 70 years of age, with rare instances documented up to 100 years.

The American crocodile is the second most widely distributed of the New World crocodiles. Crocodylus acutus is found in the southern tip of Florida, both the Atlantic and Pacific coasts of southern Mexico, Central America, and northern South America to the Venesuela coast, as well as the Caribbean islands of Cuba, Jamaica, and Hispaniola.

The habitat of the American crocodile consists largely of freshwater or brackish water coastal habitats such as the saltwater sections of rivers, coastal lagoons, and mangrove swamps. However, populations are known from freshwater areas located well inland, including a number of reservoirs.

American crocodiles dig burrows to escape the heat of the summer, and will travel long distances on land if their waterhole dries up. They are active at night, basking near the water during the day.

American crocodiles have a slow rate of digestion during the cold weather, allowing them to go for months without food. The larger crocodiles feed primarily on small mammals, birds, fish, and crabs.

American crocodiles will also eat carcasses. They have been known to attack and eat humans and can be cannibalistic.

American crocodiles hunt by remaining completely motionless in the water. When prey is close enough, they attack, grabbing the animal and drowning it. They may also regurgitate bits of food to attract fish.

The American Crocodile swallows all of it’s food whole without chewing. It also eats rocks, which stay inside their stomach and grind up their food. Some scientists believe the rocks also give them stability when swimming.

Decidedly less aggressive than the infamous Nile and Australian crocodiles, American crocodiles are rarely seen by people. However, there are documented cases of man-eaters, so they should always be treated with extreme caution, and never approach them if you are lucky enough to see one. Crocodiles can move with extreme speed for their size and can easily outrun or outswim a person.

Crocodiles reach breeding maturity at about 8 to 13 years of age, at which time they are about 6 to 7 feet long. Female crocodiles occupy mostly nonsaline waters in nonbreeding season, moving to saline waters when breeding. In Florida, primarily habitat is inland mangrove swamps protected from wave action; females use open waters of Florida Bay only for access to nesting sites (Kushlan and Mazzotti 1989).

Courtship can last for two months. 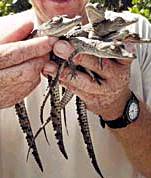 In April or May, the female crocodile will build a nest of loose dirt in a mound by the water’s edge and lay 20 to 50 white, goose-egg-sized eggs. She covers them under more vegetation, which, like mulch, heats as it decays, helping to keep the eggs warm.

Temperature affects the sex of the offspring.buries the eggs and fiercely guards her nest.

In Florida, most nest failures are due to raccoon predation and failure of eggs to hatch.

When the eggs hatch in July or early August, the female helps carry her young to the water, but, unlike the alligator, she will not continue to care for her young.

In Florida, juveniles may remain near the nest site for a year or more, and probably disperse in the second year (Kushlan and Mazzotti 1989). Young crocodiles generally occupy brackish water, but seem to do well in full salt water on North Key Largo (Florida), perhaps due to effect of abundant rainfall (Lazell 1989).

Current threats to american crocodiles are habitat destruction and in some areas continued hunting (poaching). The collection of adult breeders to stock farms could become a serious problem in some countries if not closely regulated by the appropriate management authorities.