Another white buffalo born on the Heider farm

Twelve years later, nearly to the day, another extraordinary miracle has occurred on the Heider family farm. During or shortly after a severe lightning storm, another white buffalo calf, this time a male, was born in the early morning hours to the Heider herd. Like Miracle, he is not an albino. 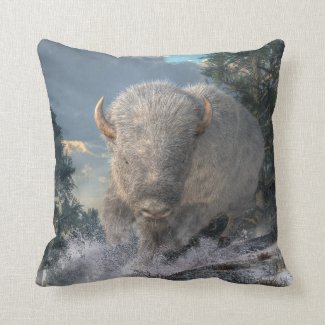 Miracle, the female Sacred White Buffalo Calf, was born on the small
family farm of Dave, Valerie, and Corey Heider near Janesville,
Wisconsin during the morning of August 20, 1994. Not an albino, she
was considered to be the first white buffalo calf born since 1933.
An incredibly rare event.

Furthermore, she was perceived as an extremely sacred traditional
symbol to many American Indian and Canadian First Nations tribes
across the continent. The Lakota, Dakota, and Nakota Nations (known
collectively as the Sioux) were considered Miracle’s primary
spiritual guardians and she played a pivotal role in the fulfillment
of their most revered prophecies.

Tragically, and unexpectedly, Miracle died of natural causes on
September 19, 2004.

According to Sioux prophesy, a female white buffalo would be born, who would change through the four colors of the medicine wheel during it’s lifetime, before once again turning white. This animal would symbolize the returning of the White Buffalo Calf Woman.

The original Miracle turned four colors by the time she was six
months old (white, black, yellow, red) before finally settling into
a red and brown coloration as an adult. She had begun to lighten
again but her death interrupted any further color changes. No one
will ever know if she would have gone back to her original white.

The original Miracle was mounted and stuffed by a taxidermist, and is on display in the museum on the Heider farm.

On August 25, 2006, another extraordinary miracle occurred
on the Heider family farm. During or shortly after a severe
lightning storm, another white buffalo calf, this time a male, was
born in the early morning hours to the Heider herd. Like Miracle,
he is not an albino.

Named by Valerie Heider, “Miracle’s Second Chance” is a lively,
captivating, confident calf who seems to be fully aware of its
special role. Mrs. Heider says she picked this name because the
calf exhibits so many of the same behaviors that the original
Miracle did as a calf and also because, “He looks a lot like her,
too.”

Even further, the herd clearly is aware of the calf’s unique
similarity. The Heiders relate that the herd treats Miracle’s
Second Chance exactly like it did Miracle by keeping him in the
center of the herd, the most protected position. Additionally, the
other mother buffalos step in and keep their own calves from being
too rough with him.

Amazingly, Miracle’s Second Chance is not from any genetic line
connected to the original Miracle. He was born to a Grand Champion
buffalo mother purchased in Missouri by the Heiders not long ago to
strengthen and diversify their herd. The sire, an unruly and
dangerous 12 or 13 month old bull (a long yearling), was sent to
slaughter before the calf was born. There are two other buffalo on
the Heider farm which are currently pregnant by this bull.

Will Miracle’s Second Chance turn colors or stay white? No one
knows. Only time will tell.

An amazing number of white buffalo have been born since 1994

Surprisingly, since Miracle’s birth in 1994, a number of white
buffalo calves have been born across the country. Some were albino
(not considered a true “white buffalo” per the traditional stories)
and many of these did not survive. Others were not pure buffalo,
reportedly a crossed-mix of buffalo and Charolais cattle or yak or
other bovine. There still remain a few legitimate white buffalo
calves alive today and now this new calf can be added to that list.

The Heider’s plan to breed this new white buffalo bull calf with progeny from Miracle’s line.

The White Buffalo was foretold in Sioux prophesies, and is sacred to native american people

Although not American Indian, the Heider family came to view Miracle
as a special gift which belonged to the hearts of all people.
Furthermore, the land on which their farm sits has always been
considered highly sacred by the region’s Native American Nations, a
fact respected by the Heider family.

Commercialization of Miracle was never allowed. At large financial
and personal cost to themselves, the Heiders opened their Wisconsin
farm to thousands of visitors, free of charge, seven days a week so
that people could visit Miracle at the pasture fence. To a vast
number of people of all races around the world, she came to
symbolize hope and renewal for humanity and for harmony between all
cultures.

Believers and the curious descended on the farm, creating traffic jams on the rural road. In 1995, visitors to the Heider farm increased tourism to Rock County by 22 percent, David said.

And while the number of visitors to the Heider farm had
slowed drastically since her death, people still came to pay their
respects to Miracle, to honor her life and message. The fence along her pasture was lined with gifts left to pay tribute to Miracle.

Now, many will come to the Heider Farm again, to see this new white
buffalo calf, Miracle’s Second Chance. Even though being male means
he doesn’t literally fulfill the Lakota prophecies, his sex does not
diminish his sacredness to the indigenous Nations.

From all cultures, some people will come in reverence and prayer; others will
come to do traditional ceremony while still others will come simply
out of respectful curiosity. But whatever the motivation, it is
quite certain they will come.

Visitors bring logistical difficulties for the Heider family. Since
Miracle’s death, they have plowed the parking area and turned it
into a corn field. Additionally, with the passing of Mrs. Heider’s
parents and some of their volunteers moving away, no one may be
available to open the little museum/farm product shop or to
accompany visitors to the pasture.

Valerie spends most days at the
local farmers’ market selling their farm products and buffalo meat
while her husband works for the Rock County Highway Department. All
in all, this means the farm is no longer open all the time, at least
right now.

Furthermore, after dedicating 10 years to Miracle and her visitors,
the Heiders had hoped to resume some kind of normalcy to their lives
and family. The shock of this birth has brought them understandably
mixed emotions ranging from envisioning their lives evaporating
again to a solid awe and respect at the incredible miracle and
responsibility of it all.

As the difficulties sort themselves out, as they most certainly will
with time, little Miracle’s Second Chance remains a strong, healthy,
obviously happy and rambunctious calf who delights in cavorting
around the pasture and trying to play with the older calves.
Oblivious to the issues surrounding him, he simply lives in the
moment and brings smiles and memories to everyone who sees the little buffalo calf named Miracle’s Second Chance.