Can America’s wild horses survive another four years of Bush?

George W. Bush styles himself a cowboy president. One job of cowboys is to claim the American wilderness for ranching, so it’s little surprise the Bush administration is behind a new effort to suppress- and perhaps slaughter-one of the last symbols of untamed America: our wild horses. 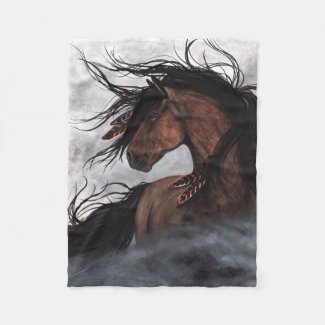 Since 1971, wild horses and burros have been federally protected by the Wild Free-Roaming Horse and Burro Protection Act, a pitched battle piece of legislation won in 1971 by Velma Johnston, aka Wild Horse Annie. (Wild Horse Annie was an intrepid Nevada character who, after seeing blood spilling out of a truck that was hauling mustangs to the slaughterhouse, campaigned for the act.)

Legend had it that, apart from the war in Vietnam, Congress received more mail about protecting wild horses than about any other issue in its history.

Now the trucks that caught Wild Horse Annie’s attention may be revving their engines again, thanks to a stealth rider attached in November to a federal spending bill. The new law, pushed by ranching interests, Western senators, and Bush’s Department of the Interior, probably condemns thousands of wild horses to the slaughterhouse- where they’re likely to be made into dinner for Europeans.

Wild horses were indigenous to North America, populating this continent before the Ice Age. They moved north across the Bering land bridge, fanned out from Siberia to the rest of Asia, Europe, and the Middle East, then became extinct here. When Europeans reintroduced horses to the Americas in the 16th century, some escaped and formed wild herds. By 1900, there were 2 million wild horses in America.

Their major predators, such as the mountain lion, were all but wiped out, and for more than a century their biggest enemy has been man. Horse roundups and massacres went unchecked for decades until Wild Horse Annie came along.

In 1971, when the act was passed and signed by Richard Nixon, perhaps 50,000 horses remained, according to the Bureau of Land Management, the Department of Interior agency in charge of them. It’s hard to count horses, but today, according to the BLM, there are 36,000 on public lands.

Wild horse advocates dispute that number and say there are no more than 20,000 still roaming the range. Everyone agrees that the numbers are dwindling and most of the horses are in Nevada, which is where the wild mustang is making its last stand.

(The state gives the mustang props everywhere-brothels name themselves after it, downtown Vegas features wild horse statues, its picture hangs in every dive bar in the desert-but in real life, it gets no respect.)

Today’s fight over wild horses is a strange battle, in which cattlemen and ranchers-the traditional enemies of the wild horse-have inadvertently teamed up with environmental groups, which generally regard wild horses as an invasive, non-native species.

Along with the oil and gas lobbies, the ranching industry largely determines BLM policy toward public lands, which is where wild horses and burros roam. Many ranchers who lease grazing land from the BLM for meager fees-a situation opponents call “welfare ranching”-see wild horses as pests that destroy the land and take food from cattle, although study after study indicates that cattle do more damage to the range than horses.

Moreover, public lands west of the Mississippi, which is where most of the country’s remaining wild horses live, supply just 3% of our beef.

Under a myriad of management schemes and subsequent legislation, the 1971 law meant to protect the horses has been gradually weakened in order to deal with what the BLM says are “excess” horses.

The BLM established “herd management areas” and “appropriate management levels” aimed not, as the act mandated, at preserving wild horses but removing more and more horses from the range.

In 1971, there were 303 herd management areas; today there are 201. According to advocates who gathered recently for a conference in Carson City, Nev., the BLM has been grabbing small herds of horses in surprise sweeps.

Periodically, the BLM enforces a policy of “zeroing out” horses, which means completely eliminating horses from a particular herd management area, thus opening it up to drilling and the introduction of more cattle.

Under Bush, slow-motion neglect has been replaced by a vigorous assault on mustangs. The BLM’s wild horse removal policy has escalated ferociously. The “gathers,” as the BLM calls them, are carried out by helicopter and are reminiscent of The Misfits, the Marilyn Monroe movie about the cruel mustang roundups outside Reno in the 1950s and ’60s.

Although helicopter roundups aren’t as traumatic for the horses as the fixed-wing aircraft roundups depicted in The Misfits, horses can instinctively run themselves to the point of injury, if not death.

I witnessed several roundups this summer and saw foals being trampled by frightened mares and stallions once they were inside cramped holding pens.

Horses that survive the roundups face a murky future in the BLM’s cute-in-name-only adopt-a-horse program. For $125, you can buy a wild horse at one of the BLM’s adoption events held periodically around the country.

The BLM tries to make the adoption easy, providing information on mustang training clinics, and lately even in some states offering to drive the horse to you at no cost. Full ownership is not granted for one year, a period in which the BLM may make surprise inspection visits.

The problem is that there are many more horses in BLM pipelines than there are adopters, yet the roundups continue.

In 2004, almost 4,000 wild horses and burros were removed from Nevada public land. An additional 5,000 at the very least are slated to go this year; the goal is to cut the wild horse population in half by the end of 2005.

Wild horse advocates fear that if the government even comes close to these figures, the herds that roam the range will no longer have the numbers to sustain themselves.

But the November rider represents the gravest threat yet to the remaining mustangs-and a triumph for the cattle industry. Many senators and representatives did not know that Montana Sen. Conrad Burns had attached the last-minute rider to the 2005 federal appropriations bill when they approved it before their Christmas break.

The rider probably spells doom for many of the 14,000 wild horses that languish in BLM facilities because they have not been adopted- and also endangers horses rounded up in the future.

According to the new law, which took effect in January after Bush signed it in December, any horse that is older than 10 (not old for a horse) or has not been adopted after three tries through the poorly advertised adoption program can now be sold to the highest bidder.

“Highest bidder” generally means middlemen who resell the horses to slaughterhouses. The demand for horse meat comes from Europe, Japan, and Mexico, and as fear of mad cow disease escalates everywhere, the appetite for it increases.

This combination of increased roundups and sales to meat-packers will devastate the remaining herds.

A few legislators are fighting back. On Jan. 25, Rep. Nick Rahall of West Virginia, the ranking Democrat on the House Resources Committee (which oversees wild horse policy on federal lands), introduced a piece of legislation along with Republican Rep. Ed Whitfield of Kentucky to overturn the Burns rider.

“Very few icons of the West remain,” Rahall said, “and wild horses are certainly a symbol of the frontier era and our nation’s spirit. To allow them to be slaughtered without exhausting all other options, such as adoption, is an affront to our history.”

Even if the horses aren’t immediately sold to slaughterhouses, they face another potentially disturbing fate. They may be bought by a prominent Montana rancher named Merle Edsall, who has planned for months to “repatriate” 10,000 wild horses to a “sanctuary” in Mexico.

Edsall says he wants to build a wild horse tourist attraction, but once they move south of the border, it would be impossible to monitor what happens to them. Edsall may also have influenced the Burns rider.

The language in the Burns rider was the exact same wording floated by Edsall at a meeting of the BLM’s Wild Horse and Burro Advisory Board last February in Phoenix.

Many wild horse advocates are hoping that the Rahall/Whitfield legislation will win additional sponsors and will be enacted quickly in the current Congressional session. But public lands ranchers are a powerful interest group.

If the Burns rider remains as law and is carried out, our cowboy President-recently characterized by Burns as “a man who earned his spurs”-may be remembered for eradicating the living symbol of the American West, the very horse he rode in on.

Deanne Stillman is writing Horse Latitudes: Last Stand for the Wild Horse in the American West.

Please contact your elected senators and reps from YOUR state and comment. Ask for their support in H.R. 297, if they are not already a co-sponsor of the bill. If they are a co-sponsor, please write to them and thank them.

BLM Adoption Facilities – Locations to adopt a wild horse or burro from the BLM.