Hornbills are large distinctive tropical birds, found only in the African and Asian continents.

These are the only birds that have a two-lobed kidney and the only ones in which the first two vertebrae (the axis and atlas) are fused together. 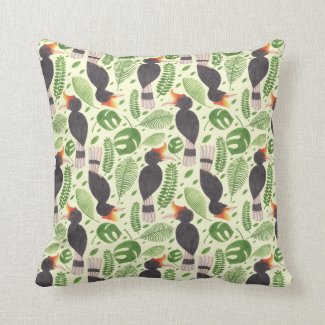 There are 54 species of hornbills in the world out of which 13 of them have been recorded from Thailand alone. Hornbills play some important ecological roles such as dispersal of seeds from the fruits they eat and control of some prey species.

Rainforests are the major habitats for Asian hornbills. Some species are found in deciduous forest such as great hornbills and oriental pie hornbills.

Hornbills are primarily fruit eating birds. They eat various species of fig (Ficus sp.) More than 60 species of non-fig fruits are consumed by them. However, some of them like Brown hornbills even eat some small animals such as mouse, lizards, snakes, geckos and some insects for protein and calcium source.

Hornbill’s breeding season starts late rainy season from October to May. Hornbills use the cavity in the tree for building their nests. The nest sizes are measured up to their body size.

The Breeding behavior of the Hornbills is very attractive for wilderness enthusiast for these birds pair for years and sometimes, for their entire life. When the male meets an attractive female, he tries to spoil her with valuable feed such as; prey animals or juicy fruits. Females then test her mate-to-be by trashing those gifts away.

The Hornbill Male will try again and again to show his ability and will also prepare appropriate surrounding conditions for the females to lay eggs. When female accepts that male, he will further lure her to the nesting site by precious feed. She then, observes the nest cavity and if she is satisfied, she will allow that male to copulate several times in a day.

While she is going in and out and starts to seal the opening with mud, food and faeces, the male keeps bringing her the precious feed and copulates too.

Hornbill females will lay several eggs and incubate them till the hatching day. Large species sometime burst the seal to help the males feed their chick’s. Females of smaller species will stay inside the nest hole and go out the same time when the chicks fledge.

The hornbill is critically endangered. The major limiting factors for the decline in the number of hornbills are the decrease in their number and not enough nest cavities.

Many of the rainforests are being used as human settlements and agricultural areas; the minor reasons being hunting and poaching. Now, IUCN status of this species is critically endangered. CITES categorized these species into appendix 1.

This is the first recorded breeding success of Khao Kheow Open Zoo(KKOZ), Chonburi Province, THAILAND. KKOZ is one of the five zoos under the umbrella of “The Zoological Park Organization under the royal patronage of His Majesty The King”.

The organization is under supervision of The Department of Natural Parks, Wildlife and Plants, The Ministry of Natural Resources and Environment.

Objective of this hornbill study:

The main idea of this study is to intervene with the limiting factor and make them offering factors. The major target is to obtain more successful breeding while learning. “How” and “Why” the birds choose their nest hole.

The results of this study can be used as a recommendation for nest box construction which can lead to more promising outcomes. Scientists who work on “Artificial nest box programme” for wild hornbills can also use information gained from this study to design artificial nest boxes.

The authors wish to contribute this information to enhance captive breeding which will assist conservation of these critically endangered species both in wild and captive conditions.

Asian Wildlife Consulatncy Co. Ltd. is trying to save the hornbills from getting extinct.For more details of the project please visit our hornbill study page.