Caribou on the move

“There are two forms of nature. One is the nature you see every day. The other aspect of nature is something very distant, very remote. You don’t see it, but you know it’s there. It’s spiritual. It has to do with imagination, with soul. Without this kind of nature our daily life may not change, but something—soul—is missing.”
~Michio Hashimo, caribou watcher Although they’re not the least bit aware of it, caribou have become the subject of a hot political debate that has been boiling over the past five years. It would seem these unobtrusive creatures of the remote arctic tundra and boreal forests of North America and Greenland would be far from the spotlight of national politics, but their future became uncertain when Washington announced plans to open the Alaska National Wilderness Reserve (ANWR) to oil and gas drilling. 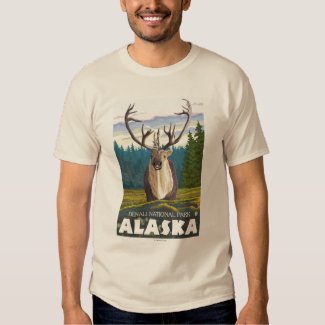 At almost twenty million acres, ANWR would seem big enough a place to accommodate the interests of bipeds and quadrupeds alike, but the narrow coastal plains, where fossil fuels are suspected to abound, happens to also be the center of biological activity for a quarter of the year. This valuable two thousand acre stretch is the calving grounds for two large caribou herds.

Caribou are creatures on the move. Weather patterns and biological instinct trigger migratory movement. Each spring the pregnant cows lead the herd from their southern winter range to their northern calving grounds between the Katakturuk and Kongakut Rivers.

Having left before the flush of early spring foliage, the cows suffer a constant energy deficit on this trail. They travel twelve to fifteen miles a day, crossing icy rivers and plodding through spongy muskeg to reach their destination by late-May, early-June.

Here they give birth in relative safety; the wolves, grizzlies and eagles that would prey on newborn calves tend to stay below in the woodland forest areas. Although calves can run within ninety minutes of birth, they and their depleted mothers are no matches against a persistent predator.

The high-quality grasses, sedges, flowering plants, willow leaves, and mushrooms of the calving grounds soon restore the health of the cows. The reddish-brown calves, which weigh approximately thirteen pounds at birth, grow stronger and stronger, doubling their weight within ten to fifteen days. Yet even in this sanctuary, 20-25% of caribou calves die in their first month of life.

By mid-summer, mosquitoes and warble flies are almost intolerable, driving the herd in thousands to find refuge in old snow patches or windy ridge tops. By staying in these huge post-calving aggregations, the herd continues to protect the cows and calves from predators. As August approaches the herd will disperse into smaller groups to feed. Where the caribou goes largely depends on food-quality and the presence of insects. In September they drift toward their winter range, which shifts slightly from year-to-year, minimizing the effects of over-grazing.

Mating occurs en route in September and October. Caribou, which are members of the deer family, are the only species in which both females and males grow distinctive antlers. These antlers can grow up to four feet in width.

As fall approaches, the larger bulls, weighing between 350-400 pounds, begin to shed the fur on their antlers, called velvet, marking the approach of the breeding season. Sparring, dueling, and chasing each other, bulls compete for breeding rights. Unlike other herding species, bulls do not maintain harems, but instead fight for control within a space.

Stronger bulls win space and cows toward the center of the herd, where predators are kept at a minimum. Weaker and younger bulls are forced to the dangerous outskirts. Females can mate as young as sixteen months, although most will not until they are at least a year older than that.

And yet the move to winter quarters continues. As the weather turns cold, caribou adapt. Their metabolic rate lowers, enabling them to reduce food intake. Throughout the winter they use their concave hooves to dig in the snow to feed on lichens. These broad hooves are also ideal for tramping across soft ground and paddling in rivers.

Caribou’s unique hairs trap air, providing insulation and buoyancy. An inner compass pushes them onward. Nothing it seems can halt the annual migration. Yet the one thing which has noticeably interrupted their fixed patterns has been the human influence on their habitat.

22,000 caribou are killed each year, providing food, shelter, and medicine for hunters and arctic tribes, such as the Gwitchin. In Alaska, hunters harvest more caribou than any other big game species. Maintaining a healthy caribou herd contributes to the economy in Alaska.

These activities have never threatened the caribou, which now number 950,000 in Alaska. Aboriginal hunters have been a part of the caribou story for thousands of years. It is not man himself that is the threat, as the caribou’s domesticated Eurasian cousin, the reindeer, can attest.

It is the modern activities of man: logging, coal mining, and oil and gas exploration which affect the caribou most dramatically. Surveys of oil and gas facilities in Prudhoe Bay show that caribou will not calve within thirty miles of such man-made structures.

Unfortunately, the strip of land now being targeted for exploration is only thirty miles wide. Unlike the situation at Prudhoe Bay, there are no good alternative calving grounds. And so, time will only tell how these Ice Age survivors will weather their next storm.