Coyote and Eagle Steal the Sun and Moon

Back when it was always dark, it was also always summer. One day, Coyote and Eagle went hunting. Coyote was a poor hunter because of the dark. Eventually, they came to the Kachinas, a powerful people. The Kachinas had the Sun and the Moon in a box. 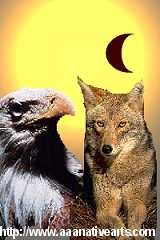 After the people had gone to sleep the two animals stole the box.

At first Eagle carried the box but Coyote convinced his friend to let him carry it.

The curious Coyote soon opened the box and the Sun and Moon escaped and flew up to the sky.

This gave light to the land but it also took away much of the heat, so we now have winter.