Bridget, An Unexpected Gift, has crossed the rainbow bridge

Bridget crossed over the Rainbow Bridge at 9:10a.m. on November 20, 2001, assisted by euthanasia, after an extended and heroic battle with chronic renal failure. 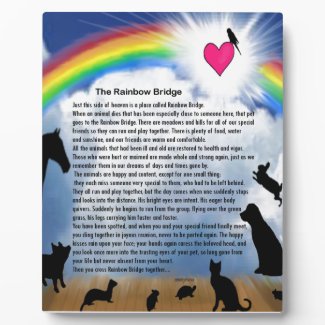 She lost this battle, but not without a good fight. May she win the next one.

She made this a better world. Until we meet again, she will live in our hearts and a thousand memories.

Bridget came to me when she was four months old. My fifteen year old lab, Rusty, had developed diabetes and began struggling during the spring of 1992 with advancing renal failure.

He compensated for it by drinking lots of water. People around me at the market had been remarking on the excessive amounts of water he’d been drinking, but at the time I didn’t know what that meant.

I didn’t recognize it as a warning signal that something was wrong with him. His condition wasn’t diagnosed until it was too late.

During the week before his death, I was despondent because I knew I would be losing him soon; however, I had no idea Death was already approaching.

I just knew he was old and hadn’t been acting very lively lately. I put that down to his arthritis and old age. Fifteen is old for any dog, and doubly so for a Lab, which as a breed on average live to be around nine or ten.

I was thinking more along the lines of his advancing age, rather than of an acute illness. One day I just got to thinking about his age and couldn’t shake the feeling that he would be going soon.

At that time I was working weekend craft markets for a living and was a “regular” at the Taos Flea Market in New Mexico. An elderly man with a huge heart named Tony ran the market. Tony was about 80 years old. The tourists thought he was a “colorful character.”

On the Saturday before Ruffy’s death, old Tony showed up at the market with this ball of fur with a little black button nose sticking out of a mountain of red-gold fur and her twitching black whiskers stood out in the sunlight.

Her tongue matched her sweet little nose in color and was visible often, hanging from the corner of her mouth ready to lick anyone who got close enough. Her big brown eyes were full of curiosity and wonder in the bustling market.

It was Memorial Day Weekend, the last weekend I would be spending at the Taos market that year. I was scheduled to sell my crafts at a pow wow in Texas the following weekend some 1,000 miles away.

Tony brought her over to my booth and said someone had dumped her off at his house and he had to find a home for her. Several years later I found out he paid $150 for her, and had bought her specifically to give to me.

Now the last thing I wanted right then was a new pet, and if I were going to get one, a Chow Chow would probably have been my last choice. I told Tony that as I began explaining why I couldn’t take this pup.

Old Tony was not only a generous soul, he was a crafty one. His response to my objections was that he didn’t have time to take her home until the market was over for the day and asked if I could just watch her for him until then.

“All that hair, they have a reputation for cranky dispositions and I’m dealing with the public for a living,” I said.

“It’s all in how they’re raised,” Old Tony replied. “You raise em up around people, and they are bound to like people.”

“Besides, she’s only half chow. The other half is siberian husky, and them’s friendly dogs.”

“Aren’t you always looking for hair to decorate that stuff you make?” he continued. “Why, you could make stuff out of all that hair you brushed out of her. And get yerself some exercise. Do you both some good.”

And it went on like that. Throughout the day, Tony would drop by the booth to see how we were doing. I’d bring up a new objection and he’d have a ready answer.

I lived on the road, sleeping in my van most of the time, in a different town every week for eight or nine months of the year. I criss-crossed the entire United States twice in the course of a year’s shows. I didn’t need a puppy to take care of.

Old Tony reminded me, “Dogs like to go for rides, they get to looking forward to it.”

“It gets mighty lonely out on the road. And a woman traveling alone should have something for protection.”

“Hasn’t old Rufus had a good time these last few years? He wasn’t even raised to be a road dog, and look how he took to it.”

“He’s been more places than most men ever get to go. He’s had himself a grand old time, it didn’t hurt him a bit,” he added.

I made Indian crafts for a living, so my cramped van was full of supplies and merchandise made of feathers and fur, rawhide and bones; things that would be irresistable to a puppy that was at the right age to be teething.

“Siberian Huskies are a breed known for tearing things up and being destructive,” I pointed out.

“Just buy her some rubber bones, and teach her those are hers and the other are yours. It won’t take long, look how smart she is.” Tony’s eyes twinkled. He was enjoying this exchange of wits.

His eyes narrowed a bit, and a dimple showed in his cheek. “Ain’t you smart enough to teach her? You taught old Rufus not to bother your stuff, didn’t you?”

The last thing I needed was another animal to care for. Especially a puppy that wasn’t housebroken. An unspayed female puppy.

Plus, I was grieving for the animal I instinctively knew I was about to lose.

At the end of the day Tony came back to my booth and said, “By the way, did I mention she’s already housebroken?”

I stared at him hard and tried to look exasperated. He shuffled his feet. “She’s had her shots, too,” he mumbled.

That dimple returned again and he gave me a knowing smile when I “grudgingly” said, “OK, already, I’ll keep her.”

The very next day, my old boy became critically ill and I made the decision to have him put down. The vet I took him to (the only one available) said he disposed of dead carcasses at the local dump, so I took his body with me.

Being on the road, I had nowhere to bury him. Old Tony helped me dig a grave at the back of his flea market in one of the driving rain storms that occur there almost every afternoon that time of the year.

We planted a small tree over his grave. Ruffy’s decaying body provided fertilizer to give it a good start and became part of that tree. Today, that tree is about thirty feet tall. I like to think of Ruffy watching over the area from its uppermost branches.

Afterwards, I crawled into my van, drenched to the skin, and not just from the rain.

I felt so lost as I sobbed into little Bridget’s fur and hugged her warm little body to my aching chest.

That was her first weekend in my world. What a special gift she was, just when I needed her.

And I did eventually use bits and pieces of her fur to decorate my artifact reproductions. So her spirit now resides in hundreds of homes all over the world, offering her guidance over their daily lives, whether they know it or not.