We are all familiar with dolphins, whales and sharks; we know what tuna and snapper look like, but what about some less familiar fish such as lizardfish, giant squid, or blind eels? 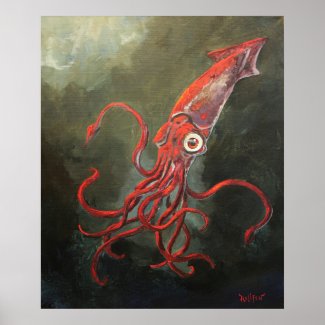 There are so many lesser known animals in the depths of the ocean that we hear little or nothing about most times, it is interesting to investigate a few of these creatures and understand them a little more.

Another area where their existence is apparent is on the skin of sperm whales where giant sucker scars can be seen after what must be epic battles between the two huge creatures. Giant squid can grow to the size of a school bus or bigger.

They are carnivorous and have a long, torpedo shaped body. At one end, surrounding a beak-like mouth strong enough to cut through steel cable, are five pairs of arms. One pair, thinner and longer than the rest, is used to catch food and bring it to the mouth.

Just past the mouth are the eyes, eyes that are the largest in the animal kingdom, getting as big as eighteen inches across. They are nearly impossible to photograph alive because they live in such deep waters.

It is interesting to think about what other types of deep sea animals exist that we haven’t yet discovered. What wonders does the bottom of the ocean hold and can we ever know?

With modern technology constantly searching for new ways to study the ocean floor, the possibility of finding new creatures becomes more real every day. For a world who thinks they have seen it all, the deep, deep ocean still holds the hope for something new.