Her Struggle is Over

I just finished burying my oldest and dearest friend. When I got home from work last night I found her out in the yard and she was too weak to get up.

She couldn’t stand even with help, and cried when I picked her up to carry her into the house. I knew in my heart that it was time to end her suffering. 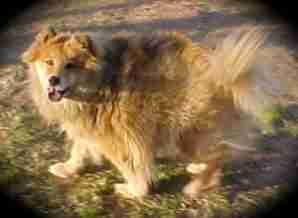 This morning I took my dear Bridget to the vet for euthanasia after a seven month struggle with chronic renal failure.

She died in my arms without a struggle. The end came quick and appeared pain-free. As people often refer to it, she seemed to just “go to sleep.” Only this time she isn’t waking up. At least not in this world.

I made an appointment with the vet yesterday afternoon for 9:00am today. I believe Bridget knew it was coming last night.

I sat up with her most of the night and near dawn, several times she half rose up, the best she could, and stared intently off into the distance for a few seconds with an expectant look on her face, then lay back down.

Last night I wasn’t sure she was going to last through the night to keep this appointment. Her breathing was raspy and irregular and she was so weak she could barely raise her head. This morning, as usual, she was acting like she felt better again.

I set her down outside the gate to see if she needed to potty before we left to go to the vet’s, and after she did her business, she started to trot off towards the neighbors like she was just fine. I actually had to jog a few steps to catch her. She hasn’t moved at more than a walk in months.

It was sort of erie, I took her to town to do it and didn’t show the body to the rest of the pack when I came back. But a few minutes after I finished covering her grave, my whole pack started howling and kept it up for about ten minutes. It’s very unusual for them to howl like that, for that long.

It was like they felt her spirit passing and were saying goodbye. I have heard several others say their packs reacted the same way when one of theirs passed on.

I’m trying to convince myself she’s in a better place tonight. I hope she is pain-free wherever she is and in a place of peacefulness.

For me, a new struggle is beginning.