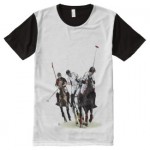 Horse polo is arguably the oldest recorded team sport in known history, with the first matches being played in Persia over 2500 years ago. Initially thought to have been created by competing tribes of Central Asia, it was quickly taken up as a training method for the King’s elite cavalry. These matches could resemble a battle with up to 100 men to a side.  END_OF_DOCUMENT_TOKEN_TO_BE_REPLACED


Warning: Invalid argument supplied for foreach() in /home/petandwildlif/public_html/wp-includes/script-loader.php on line 2781