To gaze into their eyes is to touch tranquility. Perhaps it is because they spend so much of their lives removed from our terrestrial sphere that these creatures can inspire such serenity in just one glance. 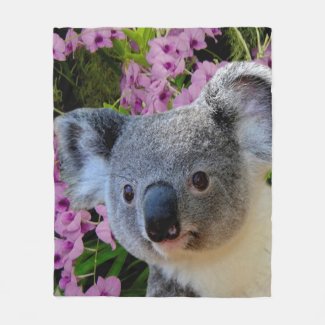 Perched in the canopy of the tall Eucalyptus forests of Australia, koalas pass their lives unperturbed, nap to nap, meal to meal.

From their poofy tufts of ears to their rounded rumps, koalas resemble stuffed teddy bears, but in actuality, they aren’t bears at all.

Koalas, like kangaroos and possums, are marsupials, meaning they give live birth to jellybean-sized, embryonic offspring, which climb unaided from the birth canal to its mother’s pouch.

Protected in the pouch, the baby, called a joey, attaches to its mother’s teat and feeds for six to seven months, until it has developed eyes, ears and hair. Then it peeks out at the world for the first time.

What does the world look like from 150 feet up? Koalas eat and sleep in trees, rarely coming to the ground except to occasionally change trees or seek shade.

On the ground a koala is vulnerable to dogs and other wandering predators, for it has an awkward gait and moves slowly.

Koalas are designed for climbing. Lean and muscular, with arms and legs of near-equal length, koalas possess an excellent sense of balance. Their front and hind paws have five digits with long, sharp claws.

Rough pads on their palms and soles help in gripping branches. Their thick fur is ash-grey with a tinge of brown at the ears and white on their chests, while the fur on their bottoms is speckled to camouflage them from the ground.

Bottom fur is also thicker, providing them with natural cushions for the hard branches they sit on.

Although there are 600 types of Eucalyptus, koalas are rather fussy about the leaves they will eat. Only trees grown in areas with suitable soil and adequate rainfall entice a hungry koala.

Their name stems from an Aboriginal word meaning “no drink”—an apt name, since 90% of the koala’s hydration comes from leaves. Except during times of drought or illness, koalas won’t drink water.

Even at their best, gum leaves are poisonous, fibrous, and low in nutrition. The koala’s digestive system is especially adapted for its diet. Bacteria present in its intestines breaks down toxic oils in the leaves, while its slow metabolic rate conserves energy.

On average, a koala will sleep 18-20 hours a day. They sleep mainly during the day when it is hot, and are most active at the hours of dawn and dusk.

They have been spotted sitting and sleeping in some very interesting positions, depending on the temperature. In the heat, koalas will dangle their arms and legs from the branches to keep cool, while in cold temperatures they curl into tight balls to conserve heat.

Koala’s woolly fur helps to insulate them from extremes in temperature, while serving as a raincoat in moist weather.

In optimal conditions, koalas live up to ten to twelve years; although those in the wild generally live half that long or less. Females live longer than males, and reach sexual maturity at three or four years old.

Depending on the quality of their ranges, females can produce one offspring per year. After peeking from its pouch the first time at 22-30 weeks old, the joey will begin eating pap produced in its mother’s intestines, in addition to milk.

Pap is critical in a young koala’s diet, for it supplies the bacteria needed to process eucalyptus leaves. Once the joey is too big for its mother’s pouch, it uses its claws to hang from her back or her belly.

Mothers and babies are often spotted feeding in this way, or cuddled together asleep. When a new joey has taken its place in the pouch the mother koala will wean the year-old adolescent, and send it off to find its own territory.

Koalas live in societies, although each koala will maintain an individual range. Long-term territories include food trees marked by scent, and critical home-range trees, which overlap into other territories, allowing for social interaction between koalas.

In poor conditions where a range cannot sustain a society, reproduction will be affected, and the koala population will dwindle. This is significant in light of the fact that 80% of Australia’s eucalpyt forests have been decimated in recent years.

None are protected, and most occur on privately-owned property where land-clearing efforts are underway. Thus the largest threat to koalas is the on-going loss of their habitat.

As we contemplate the koala, dangling from the highest forest branch, their populace dangling in the brink of its fragile habitat, koalas impress upon us a lesson in balance.

Perhaps it is this very balance that must be mastered in order to cultivate the serenity and tranquility that are the hallmark of the koala.