Puffins, the Parrot of the Sea

From the ocean bursts a shiny five-year-old male puffin carrying a dozen small herring in his beak. It is August on the coast of Iceland, and the air is filled with the deep garbled growls of hundreds of puffins. The social birds have come to shore for the short breeding season, and the rocky banks are dotted with their squat, football-shaped bodies. 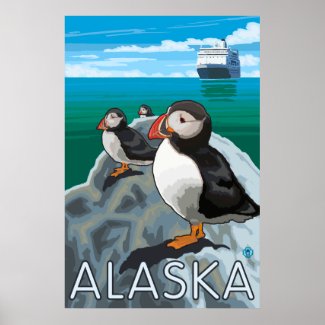 Flapping his wings mightily, he rises from the waves to the rocky cliffs where a hungry chick waits silently in a burrow hidden in the rocks. The puffin circles the sky above the burrow several times, looking out for herring gulls, which sometimes wait ashore to steal a puffin’s catch.

But the coast is clear and the puffin swoops down, entering the dark burrow with a flurry. Instantly the chick springs to life, demanding its meal with tiny squeals. Downy gray and plump, with a sliver of a beak, the chick hardly resembles its striking black and white father.

Large and colorful beaks, which will fall off after the season is over, have given these arctic birds their nicknames—the sea parrot.It was once questioned whether the pelagic puffin was a cross between a bird and a fish.

Awkward and clumsy-looking on land, it certainly appears more adept in the sea, where its short wings effectively propel it through the water after small herring and sand eels. Its webbed feet function as a rudder, allowing the bird to maneuver sharp turns.

Puffins can fly, and will actually beat their wings 100-400 beats per minute to become airborne. But because of the effort required to take flight, puffins will nest on cliffs where they more easily swoop down into the ocean.

Puffins fly low to the water, and can reach speeds up to 55 miles per hour.

A puffin’s diet comes from the icy depths of the ocean, and an average dive can last twenty or thirty seconds, or more. With their specialized beaks, puffins are able to hold several fish at a time. Their raspy tongues hold fish against spines on their palate while they open their beak for more.

An average catch would be 10-12 fish, but one puffin reportedly brought 62 fish in its beak at one time! Waterproof feathers provide protection from the chill of even the coldest waters in the arctic region.

Even its coloration lends to its survival in the sea. The puffin’s dark coloring on its back make it difficult for predators to distinguish it from the dark waves as it floats on the ocean, while from below its white underside masks it from ocean enemies. This deceptive coloring is called counter shading.

In the 1800s over-hunting obliterated a native population in Maine, which has since been restored. They are not presently threatened.

Puffin colonies are found breeding off the coasts of Alaska, Canada, North America, and North Asia; although Iceland is the breeding quarters of the largest population of puffins. Coastlines are filled with thousands of breeding pairs during the summer months.

Puffins are monogamous, and while companions may part for the winter, which they spend out on the open sea, they usually return to the same partner, and even the same nest.

The rigorous mating ritual begins while the pair is still at sea. Breeding pairs engage in billing each other, skypointing (flying straight up), and strutting. By the time birds reach the shore, partnerships are well-established.

The male digs the burrow using his beak to cut into the soil and his feet to shovel the rocks and other loose material away. Ideally, the burrow will be 2-3 feet long and protected from predators by rocks. Here the female lays one egg per year.

Together, the pair incubates the egg, each taking a turn holding it under one wing and pressing it against its body. Cooperating in this way, both birds are able to leave the nest to feed.

When the egg hatches 40-53 days later, the parents continue to share responsibility for the chick. Feeding occurs four to five times a day, and after the first day of life the chick can be left alone in the burrow to wait for its next meal.

The chick remains in the burrow about 40-55 days, whereupon it waits until evening before independently approaching the opening of the burrow for the first time. The fledgling sets out to sea on its own, where it will live for the next two years.

Puffins reach sexual maturity at 3 years old, but will not generally return to their nesting grounds to mate until 4-5 years old. Puffins live long lives of 20 years or more.

Historically humans have used the puffin for meat and clothing (its skin is waterproof and warm when worn with the feathers turned inside), but hunting is generally discouraged today. In some countries it is forbidden by law.

Meanwhile, man has come to value puffins as indicators of ocean health. By observing the condition of the puffin population, scientists determine whether over-fishing or harmful pollution is taking place.

Oil spills threaten puffins by de-waterproofing their feathers, making them vulnerable to cold temperatures. Another negative impact on puffin colonies has been the unintentional introduction of rats and foxes to summer nesting areas.