Southwest Alaskans say bird is the size of a small plane

Reports of a giant winged creature seen in Southwest Alaska in recent weeks have biolgists and residents puzzled.

Villagers in Togiak and Manokotak say the huge bird has a wingspan of about 14-feet — the size of a small plane — and is much bigger than anything they have seen before.

Scientists aren’t sure what to make of the reports. No one doubts that people in the region west of Dillingham have seen a very large raptorlike bird. But biologists and other people familiar with big Alaska birds say they’re skeptical it’s that big.

A recent sighting of the mystery bird occurred last Thursday morning when Moses Coupchiak, a 43-year-old heavy equipment operator from Togiak, 40 miles west of Manokotak, saw the bird flying toward him from about two miles away as he worked his tractor. 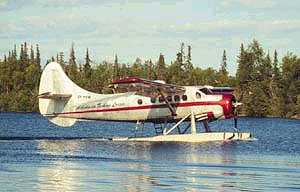 “At first I thought it was one of those old-time Otter planes,” Coupchiak said. “Instead of continuing toward me, it banked to the left, and that’s when I noticed it wasn’t a plane.”

The bird was “something huge,” he said. “The wing looks a little wider than the Otter’s, maybe as long as the Otter plane.”

The bird flew behind a hill and disappeared. Coupchiak got on the radio and warned people in Togiak to tell their children to stay away.

Pilot John Bouker said he was highly skeptical of reports of “this great big eagle” that is two or three times the size of a bald eagle. “I didn’t put any thought into it.”

But early this week while flying into Manokotak, Bouker, owner of Bristol Bay Air Service, looked out his left window and 1,000 feet away, saw a very big bird.

Raptor specialist Phil Schemf in Juneau is skeptical of the size.

“I’m certainly not aware of anything with a 14-foot wingspan that’s been alive for the last 100,000 years,” Schemf said.

Schemf, other biologists, a village police officer and teachers at the Manokotak School said the sightings could be of a Steller’s sea eagle, a species native to northeast Asia and one of the world’s largest eagles. It’s about 50 percent bigger than a bald eagle.

The Steller’s eagle has occasionally shown up in the Pribilof Islands, on the Aleutian chain and on Kodiak. 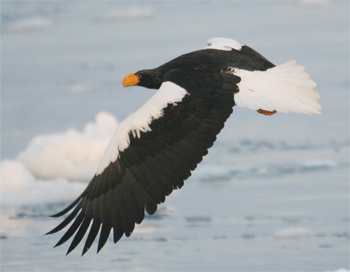 A bird known to be a Steller’s sea eagle has been spotted three times since May and in August of last year, 40 miles up the Nushagak River from Dillingham, according to Rob MacDonald of the U.S. Fish and Wildlife Service.

Another Steller’s eagle took up residence on the Taku River south of Juneau for 10 summers starting in the late 1980s, Schemf said.

The fish-eating Steller’s sea eagle can weigh 20 pounds and have a wingspan of up to 8 feet. It has a distinctive and impressive appearance, Schemf said, with a pronounced yellow beak, a black or dark brown body and large white shoulder patches.