Speaking as a friend, wolves need prayers. Columnist, old friend and snappy dresser Roger Clawson once referred to me in one of HIS columns as "artist, columnist, and friend of the gray wolf."

One out of three ain't bad.

My thoughts and babblings take up space in the newspaper. That doesn't necessarily make me a columnist. I have freely admitted that I do NOT hold a degree in journalism.

As for whether or not I'm an artist, well, that one's up for debate as well. After my high school art teacher advised me, in no uncertain terms, to pursue a career other than art, I went off to college to study wildlife science. The only problem with that plan, was that wildlife science involved science – something that my cranium simply refuses to comprehend. I freely admit it, I ain't no scientist.

I eventually DID get my degree in art, but that doesn't necessarily make me an artist. One can spend one's whole life becoming an artist.

Columnist, artist – whatever – I yam what I yam and I'm not what I'm not, but I yam definitely a "friend of the gray wolf." And since I AM a longtime friend of old canis lupus, this definitely disqualifies me from making sweeping statements and assertions about Yellowstone's wolves and the "wolf issue."

Having the decided cultural bias of being an Indian even further disqualifies me. Most tribes including my own, consider the "big bad woof" to be god-like in nature. Our history speaks of times when wolves came into our villages and told us stories around our campfires, giving us divine instruction.

Given who I yam and who I'm not, I have absolutely no business trying to sway public opinion, or influence public policy for that matter, with regard to Yellowstone's wolves. By the same token, neither should Rep. Dan Fuchs or Rep. Joe Balyeat.

Given THEIR cultural bias, and the fact that they are NOT scientists, these gentlemen have no business determining wolf policy or conducting definitive wolf research.

Balyeat "cried wolf" in a recent Gazette guest column, asserting that wolves are to blame for an alarming decline in the Northern Yellowstone Elk Herd's population. His claim is based on observations that he made, with a very steady spotting scope mind you, of some 500 elk wintering near Dailey Lake. 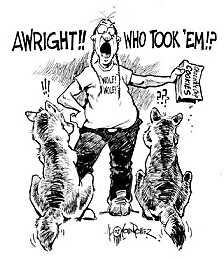 You know, I can completely understand this line of reasoning. Why, just recently I myself counted way too few bags of chocolate-chip cookies on the shelf at my favorite grocery store in Billings.

This means, scientifically-speaking, that there is an alarming decline in the number of my favorite cookies in the Northern Yellowstone ecosystem.

It must be the wolves. Those vicious thieves. It couldn't be that I've only considered one small group of cookies in one particular place, and completely ignored the entire Northern Yellowstone cookie herd's population. It couldn't be the fact that there might be so many other factors to consider when it comes to population dynamics in nature, such as winter severity, or other predators like cougars, black and grizzly bears, coyotes, and of course, human beings. No, only wolves can be blamed for this kind of unspeakable depredation on MY cookie supply.

As Doug Smith, lead wolf biologist in Yellowstone Park points out, "From now on, everything will be blamed on wolves." If only they could tell us where Jimmy Hoffa is buried.

As for our intrepid wildlife experts – gimme a break, boys. Being a native Montanan with a spotting scope, a political agenda, and an uncanny ability "to count" doesn't qualify you as a wildlife biologist. Just as being a Native American with a cultural bias and a column doesn't qualify me as one.

An Indian man recently told me he didn't like me because I pray for wolves. Tough cookies. I think wolves need praying for, given the kind of passionate ignorance that they're up against. Besides, I'll pray for whoever I damn well want, and right now I'm praying that something intelligent will come out of Helena in my lifetime. While I'm at it, I'm also gonna pray that we have the good sense to leave science to the scientists.