The local Animal Protective League is joining a nationwide effort to find homes for nearly 1,000 dogs and puppies taken from a puppy mill in Parkersburg, W.Va.

About 70 of the dogs will be brought to Ohio shelters, Cleveland APL director Sharon Harvey said this morning. Fifteen will arrive in Cleveland today. 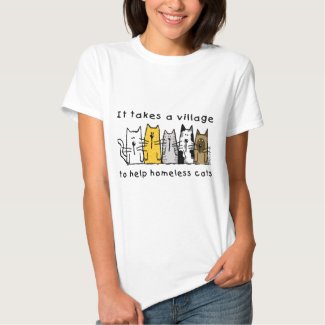 It Takes a Village to Help Homeless Cats Tshirts

The massive breeding facility packed with dogs in wire cages was shut down last weekend after neighbors complained that dog feces and urine had polluted the ground and water in the area.The dogs coming to Ohio shelters will be between the ages of 1 and 3 and likely were bred repeatedly to mass-produce puppies that were sold to pet shops. The other shelters taking in dogs are SPCA Cincinnati, the Humane Society of Greater Dayton, Capital Area Humane Society in Columbus and the Humane Society of Allen County.

Members of Marilyn’s Voice, a grassroots puppy mill rescue group based in Northeast Ohio, traveled to West Virginia Thursday and brought back 11 of the dogs. The seven dachshunds and a poodle with three puppies are in foster homes experienced with working with unsocialized dogs.

The Cleveland APL’s Margaret Garrett and Dave Walchanowicz left Cleveland this morning with the APL’s Rover van. They will return late this afternoon with 15 dachshunds, which will be neutered before being offered for adoption. The trip is being paid for with a donation from Invisible Fence of Northeast Ohio and Invisible Fence Cleveland West.

101 puppies arrived at a Northwest Washington shelter overnight. Although the majority of the dogs are Dachsunds, there are other breeds, including Yorkies, Poodles and Cavalier King Charles.

The puppies received medical exams and were groomed Thursday at the shelter, because already there is an interest in adopting the previously mistreated animals.

“My daughter and I were both talking about turning the TV off last night because whenever I hear about these inhumane situations it makes me so sad,” said animal lover Helene Shapiro. “It’s good to come down and get one.”

In fact, many foster parents who came to the shelter appeared happy to take the pups home. At least that is what Zarunda Bratt is hoping for as she checked out the dogs in  this morning. “They’re great, all of them,” Bratt said. “I wish I could take everyone home.”

Dozens of puppies also arrived overnight in Chantilly, Va. at Greenbriar Town Center off of Route 50.

The dogs may be available for adoption as early as this weekend; those interested in adopting are encouraged to visit the Washington Animal Rescue League’s Web site for further information.

Sharon Roberts, the owner of Whispering Oaks Kennels in Parkersburg since 1961, denied any wrongdoing. She agreed to give up about 1,000 dogs, mostly dachshunds, rather than face possible prosecution. Roberts also agreed to never operate a dog-breeding business again.

Rescuers claim the dogs were never let out of their cages and rarely touched by human beings.

“Nobody pets them, nobody talks to them, half the time nobody gives them water or food — breaks you heart,” said Gary Weitzman of the Washington Animal Rescue League.

“They are just kept in the you know minimum conditions to keep them alive and breathing, but not a high quality of life,” added WARL’s David Wild.

Roberts disputes the allegations that the dogs were neglected.

The Washington Animal Rescue League dispatched a van to pick up dogs from the rescue location. Crews will bring some dogs back to make available for adoption.

“We are going there because that’s where this breeder is and this breeder needs to be out of business,” Wild said.

“I just hope we can get them all good homes and that, you know, we can give them a new life,” added WARL’s Mary Jarvis.

On the Web:
Humane Society